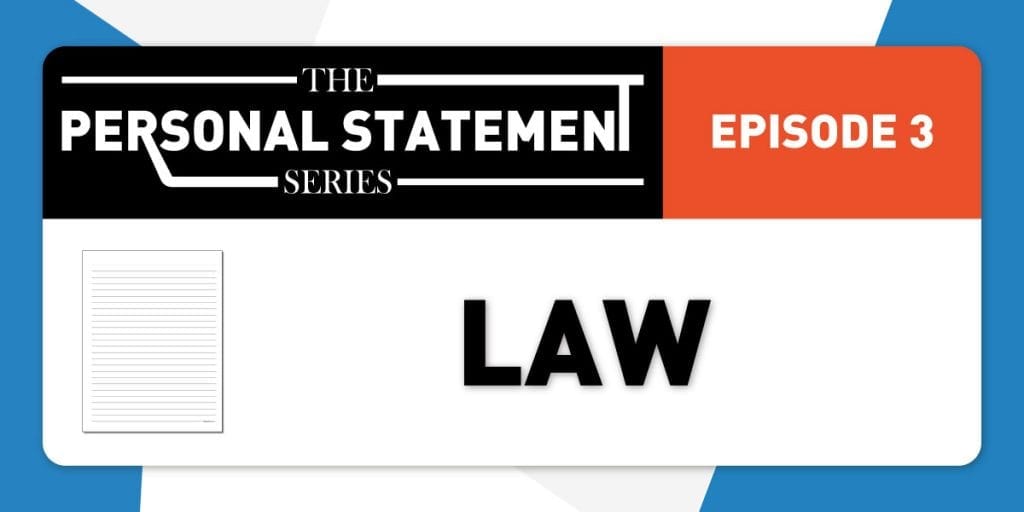 This is a Personal Statement which was submitted to study Law at Cambridge. This Personal Statement used almost all of the available characters at 3,924. Although we do not know for sure, this is very likely to be a mature applicant due to their time serving as an officer. Interestingly, this statement was only used to apply for three Law schools out of the possible five.

UniAdmissions will be posting a different Personal Statement each week for the next 2 weeks so watch this space.

As usual, here are the basic figures for the Personal Statement we’re looking at today:

As we mentioned, this Personal Statement was only submitted to three Law schools. Unfortunately, we don’t know whether the candidate left their other two choices blank or applied to a different course entirely.

Law is the epitome of human reason; it is the force that holds society together and the cornerstone on which great civilizations were built upon. By dictating a code of conduct which everyone had to abide by, it has created a system of accountability and allowed society to flourish. However, Law is never static. It changes with time – internalising new concepts and discarding anachronistic ones to reflect societal norms. It is this dynamic nature of the Law that I find so enthralling – that there exists a gamut of good answers but never a right one. Such idealism aside, I believe excellence in legal study and work does not come easy. It requires much passion, intellect and hard work.

At College, I offered 12 academic units (as compared to the standard 10 academic units) at the Singapore-Cambridge GCE ‘A’ Level Examinations. Concurrently, I represented Singapore in Swimming and was an active member of my College’s Swimming and Cross-Country team, training up to six times each week and achieving numerous medals and accolades in Inter-College Competitions. Such excellence in both sports and academics demonstrates my strong self-discipline, time management skills as well as my capacity for sustained hard work.

As a student, I heId numerous leadership positions such as Swimming Captain, School Prefect as well as being part of the Executive Committee of my College Freshman Orientation Camp. In addition, I undertook various community-based service projects aimed at spreading awareness on and massaging the plight of the less-privileged in society. These experiences in positions of influence and leadership have strengthened my organisational and problem-solving skills, teamwork as well as allowed me to develop effective communication skills.

For my ability to balance studies, sports and leadership roles, I was among the ten students (out of nine hundred) on my College’s prestigious Principal’s Honour Roll in 2011 that acknowledged distinguished academic achievement and outstanding contributions to the College. Though challenging as it might have been, I have benefited greatly from my overall College experience and would certainly look forward to continue to represent, contribute and excel in University.

During my National Service stint, I served as a Military Officer entrusted with the responsibility of
leading and nurturing the next generation of soldiers. Besides leading soldiers out in the field, I had to handle soldiers from a myriad of backgrounds as well as run the general day to day administration of the battalion. I have had multiple opportunities to serve as a Defending Officer to servicemen (who were accused of various wrongdoings) in military courts as well as conduct investigations into various malpractices in my battalion. These unique and far-reaching dealings in the Army has reaffirmed my decision to pursue law, refined my ability to think critically and to work under significant constraints and duress.

I am a firm believer in the importance of reading and see it as an avenue for the pursuit of knowledge. I read on a wide range of topics including legal conundrums, science, philosophy and even military tactics as I believe sufficient breath of thought is needed to develop one’s mental prowess. Through such extensive reading, I have honed my rigour of thought and widened my perspectives to a myriad of issues.

A career in law is diverse and dynamic, yet fraught with many challenges. Legal theory, evidence,
clientele management and not to mention regularly navigating the bureaucratic quagmire; no other field is as challenging or multi-faceted as the field of law. Though arduous, I relish the intellectual challenges of legal study and aspire to ensure human rationale and justice continues to prevail in society. Thus, I believe I possess the necessary attributes needed for legal study and excellence in the field of law.

The personal statement is well-written with no obvious errors. The student opens with quite a conceptual statement of what law means to them and this helps to make the subject seem like a well thought through choice. Additionally, the student recognises that law is a difficult and challenging course but seems unafraid of the need to put the necessary effort into it. The conclusion is similar in this respect, tying back to the introductory thoughts and ending on a strong statement of why the student feels like they would be a strong candidate to study law at university. Moreover, the student gives a very capable impression by mentioning their place on the College’s Honour Roll, as it suggests they can balance their extra-curricular activities with (and not to the detriment of) their academic studies well.

Structurally, this statement needs to be reorganised. The student’s legal interests are given attention and evidence far too late with extra-curricular activities of limited relevance being introduced closer to the beginning. In a personal statement as part of a law application, Law needs to be the primary focus throughout. The student’s positions of responsibility also come above their academic, legal interests, when they should be given less focus and come later on in the statement. When talking about the skills they developed in relation to these activities, the student makes these developed attributes sound beneficial but does not explicitly tie them to law or why they are useful to the study of law. It takes until the penultimate paragraph for the student to talk openly about their academic interests, and even then, they do not illustrate this with any specific legal examples.

The personal statement is good but could be easily improved. The student would benefit from reordering the structure of the content to open with legal or academic interests, and then saving less relevant extra-curricular activities till the end. Any activity or skill should be tied back to law wherever possible – giving specific examples of how they relate would also be helpful in getting across why the student is prepared to study law at university.

We hope this has helped you with your Law Personal Statement, especially if you are applying to Cambridge.

Remember to check back next week for another successful Personal Statement on yet another subject!

DISCOVER HOW WE DO IT
By Adi Sen
Tags: LawPersonal statement

What Is The Oxford MAT (Mathematics Admissions Test)
29th July 2020