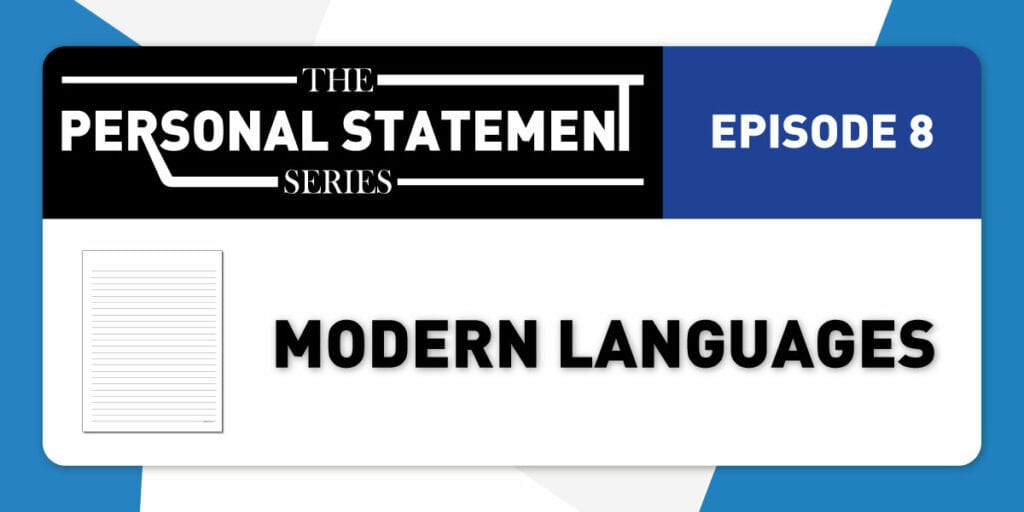 This Personal Statement was used to apply for Modern Languages (French) at Oxford and various other universities.

This is an example of a Personal Statement showing academic insight incredibly well, however, it is lacking in other areas.

Read on to see what you think, and compare your thoughts to our analysis.

Here are the basic figures for this statement;

The universities this candidate applied to were the following;

France has developed a literature of unequalled richness and variety. Europeans in any age have had few thoughts, desires, or fantasies that a French writer somewhere has not expressed-it has given the Western mind an image of itself. In this sense, French literature serves as a pool in which many cultures meet. Therefore, in particular, it is French literature’s universality which interests me.

Nevertheless, I enjoy how literature provides a window into an author’s contemporary society. For example, ‘Madame Bovary’ draws us into Flaubert’s disgust for the bourgeois existence of the 19thcentury; Zola’s ‘Thérèse Raquin’ invites us into the leprous lower-depths of Paris. I am interested in how both these writers, unparalleled in their psychological clarity and narrative muscle, provide such a brutal and relentless account of their chosen subject matter: for Flaubert, the indulgent decadence of the bourgeoisie, exemplified by Emma Bovary; for Zola, the moral dankness of the murderous lovers. In addition, I have watched Kassovitz’s ‘La Haine’ and Truffaut’s ‘Les quatre cents coups’, both similar to Zola and Flaubert in their rigorous exploration of character. Focusing on social outcasts, these films act as an exposition of societal problems. ‘La Haine’ sheds light on the all-encompassing violence and cultural exclusion of the suburbs of Paris, while ‘Les quatre cent coups’ reveals the shocking injustices in the treatment of juvenile offenders. Thus, such French cinema serves to illuminate the neglected–I relish this narrative potential in the discovery of truth.

Besides these more realistic works, both my English and French A Levels have introduced me toAbsurdism.I have appreciated the works of Beckett (‘Fin de partie’, ‘En attendant Godot’) and Ionesco (‘La Cantatrice Chauve’, ‘Rhinocéros’). These tragicomedies simultaneously entertain and provoke–the reason why I found them so enjoyable and yet so powerful. To pursue this interest in Absurdism, I read Voltaire’s absurd ‘contes philosophiques’, ‘Candide’ and ‘Micromegas’. Fiction, I found, proved to be the perfect medium of expression for Voltaire’s empiricism and scepticism. Therefore, like the tragicomedies of the 20th century, I thought Voltaire’s work succeeded both as entertainment and as an accessible manifesto of his philosophical beliefs. Furthermore, I decided to follow up this interest in such ‘contes philosophiques’ by undertaking an Edexcel Extended Project, entitled ‘Ancient Influence on French Existentialist Literature’, for which I was awarded an A*. Here, I focused on why Camus, in ‘Le Mythe de Sisyphe’, Sartre, in ‘Les Mouches’, and Anouilh, in ‘Antigone’, chose to use classical themes and motifs to communicate their own particular perception of Existentialism. Despite its challenges, the more I worked at this project, the more certain I was that this is what and how I would like to study.

Moreover, I have taken an interest in symbolist French poetry. Having studied some poetry by Baudelaire (‘Les Fleurs du Mal’) and Verlaine (‘Romances sans paroles’), I have become fascinated by the crippling and contrasting emotions communicated in these poems. I now admire how the very sound of the French language can control the register of a poem and, thus, highlight its true meaning even amongst the most abstract, intangible imagery, employed by Baudelaire and Verlaine. I am intrigued by the French language in part due to this precision.

Finally, I contributed regularly to my school’s Modern Languages magazine, ‘Babel’, and have competed in ‘Les Joutes Oratoires’, a national French debating competition in which I reached the final. Through these experiences, I have begun to thoroughly enjoy communicating in French. I believe an extra language extends one’s range. It releases you from the inertia of one cultural gear–achange of perspective that I find truly enlightening and enjoyable. I will be working in Paris from January to March.

Throughout this statement, the applicant engages consistently with a range of French texts at a very advanced level.

The applicant is able to demonstrate not only an awareness of a huge tranche of French literature but also how specific works intersect. This comparative criticism is carried out by the applicant across several different forms in a manner that is lucid and impressive.

At particular moments, this applicant veers from an academic register into an overtly formal one; a stylistic turn which, while remaining clear in meaning, is a little jarring.

More personal information would have been a welcome addition to this statement, especially since its academic calibre is so relentlessly clear throughout; the statement has the potential to be slightly breathless in its rapid consideration of big swathes of literature.

The statement could, therefore, have happily absorbed more personal information without diluting its clear academic potential.

In addition, the candidate could have taken slightly more care over their phrasing, which occasionally takes a tone bordering on reductive or patronising; a risk which is perhaps not worth taking in this context.

The candidate effectively and efficiently communicates a level of cultural awareness which goes far above and beyond the demands of their curriculum.

They are able to demonstrate how they practically carry forward their interests in extra-curricular and academic activities. Throughout the statement, the applicant engages a muscular, academically-considered tone which is clear and authoritative.

There was room in the statement for greater personal depth and warmth, and for greater justification for some of the strong academic arguments being posed.

DISCOVER HOW WE DO IT
By Adi Sen
Tags: Personal statementSocial

What Is The Oxford MAT (Mathematics Admissions Test)
29th July 2020

Fresher Life as a Medical Student at Oxford
16th July 2020