How should my child be preparing for their MMI? 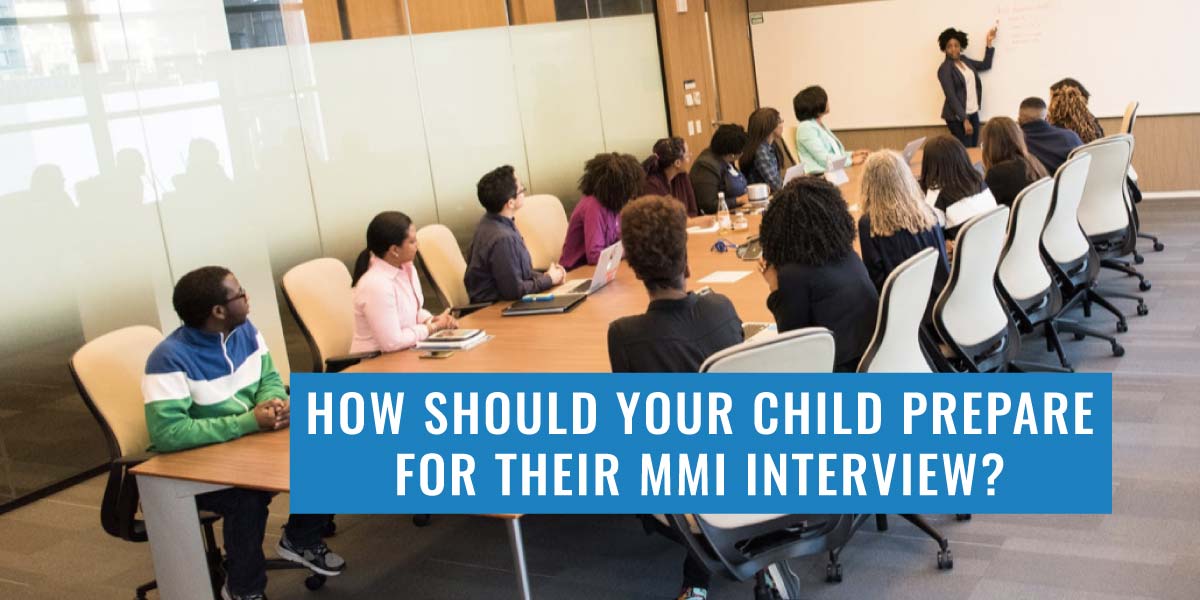 For starters, what is an MMI interview? How does it work?

An MMI, or Multiple Mini-Interview is a style of interview where the candidate, rather than receiving one long interview, undergoes a series of much smaller interviews in rapid succession. This is good for many reasons.

Why are MMI interviews used: a parent’s guide >>>

The structure of MMI interviews are fairly unpredictable.

Each mini interview is different. It may be a series of questions, or may be a role play situation involving actors that the applicant needs to respond to. The series of interviews makes for a fairly intense experience all together, and tends to last for around 2 hours in total. Each mini-interview is roughly 10 minutes long, but can vary a fair bit.

What kind of questions will get asked?

It can be difficult knowing how to tackle the MMI. The questions or scenarios that the applicants will have to deal with will all be at separate stations, all with a very particular focus in mind. There in no ‘normal’ progression to the types of stations or situations that your child may have to deal with, but the following list uses collected data and feedback from the experiences of various students to construct what types of scenarios applicants may come across in the MMI.

At these stations, students will be given a difficult ethical situation to respond to. They must show consideration towards the patient and everyone involved, whilst also adhering to proper medical conduct, and trying to reach the most ethical and moral compromise possible in a difficult but very plausible real-life scenario. Here are some examples:

At these stations, the student will be tested on their ability to show compassion and understanding in a ‘real life’ situation. These stations often involve actors, who will assume the role of a patient, friend, or neighbour. The student will assume the role of a doctor or a friend. They will be told that they have to tell the actor some bad news, which will likely make the actor react strongly. Students should remember to be considerate, friendly, and compassionate to the person they are breaking the bad news to.

This style of station simply subjects the applicant to a traditional style ‘question and answer’ style of interview, which will focus on typical categories of question relating to medicine as a whole, or the candidates suitability for the position. Some basic example questions you might expect:

This style of station will be based mostly on unseen material that the student will have looked at for a few minutes before the actual interview. This tests the student’s ability to take in new information and analyse it in a meaningful and intelligent way. Some example data analysis stations:

Teamwork tasks with other applicants

This type of station may involve more than one student, or just a single student and an interviewer/actor. They will be given a task as a group that needs to be solved using teamwork and strong clear communication skills. Here is an example MMI teamwork task:

Dealing with a co-worker

These are similar stations to the ones involving breaking bad news to an actor. These stations will put the student in a role play situation involving them (acting as a doctor) and a coworker of some description. In this scenario, the doctor needs to talk to their coworker about something they might be doing wrong, whilst remaining compassionate and calm. Some example scenarios:

Get invaluable interview experience with our interview crash course. You’ll get 4 mock interviews with expert tutors who will each give detailed written feedback to work on!