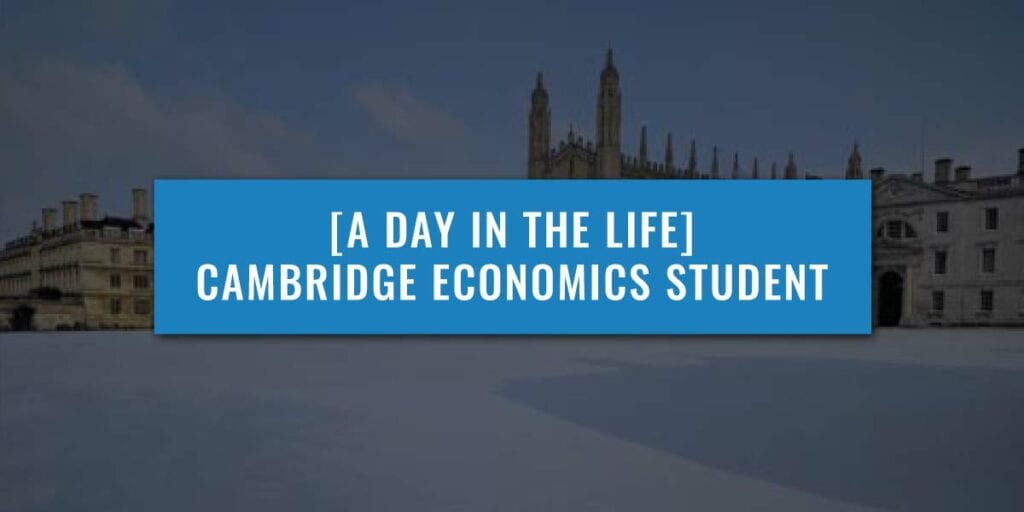 If you’re looking to apply to Cambridge to study Economics, this article will give you an insight into your daily life at university.

This article is written by Sanchit who studies Economics at Christ’s College, Cambridge. He is in his third year and plans to go into management consultation once he graduates.

Economics at Cambridge is thought to be a mathematics-heavy course, and this is certainly true.

However, don’t let this put you off; all the maths you need is taught alongside your modules, and there is no trigonometry.

Before I came, I was a little worried about the History and Politics modules, which make up 40% of the first-year course, as I had not studied History since before GCSEs!

However, this was taught from an economic lens, applying models we studied in Micro and Macro; my supervisor once said that “You are not writing a Politics essay, you are writing an Economics essay – put in theory and diagrams”.

Applying the models to real-life scenarios really helped our understanding of how they work.

The Morning Of a Cambridge Economics Students

My friends and I would typically walk over to and from lectures, which are at Sidgwick Site, together; one of the nicer parts of living in a central college like Christ’s is that usually you can pretty much walk everywhere.

Each cohort of Economics at a college is not particularly large (my year had 7 economists at my college), which means you end up being quite good friends and helping each other with work; the atmosphere is quite collaborative.

After we got back to college, we would usually have lunch together at our canteen (called Upper Hall).

Here, we have a choice of 5 mains, of which one is vegetarian and one vegan, allowing for most dietary needs to be met.

The Afternoon Of an Economics Student

In the afternoons, I usually work on supervision problem sets or go to a supervision.

In a supervision, we usually go over problem sets in small groups of 1-3 students.

The lectures cover the content, and doing the work for the supervision allows you to practice and understand the content.

It often helps to do further reading, like reading the relevant textbook chapter, to get a better understanding. In the supervision itself, you go through the problem sets and ask questions.

My biggest tip is to ask any question you have, as the groups are small enough that you have sufficient time to ask questions, even ones which you may think are stupid questions (and trust me, there is no such thing!).

Asking questions allows you to truly make sure that your understanding of the content is correct, and get things explained in different ways. It also means that when you revise the content later in the year, you know which parts you have found more difficult and already have answers to parts you didn’t understand straight away!

The Evening Of a Cambridge Economics Student

In the evenings, after dinner (which I would typically have at Upper Hall), I usually either go to the gym or have a social activity planned.

I try to get as much work done in the afternoons, so that I can make plans in the evenings.

At Christ’s, there is a free-to-use college gym, but my friends and I prefer to go to a gym which is a 10-minute-walk away as it has more equipment.

If I’m not going to the gym, I would go to a social activity, especially on Wednesdays to Fridays; usually this was something like an India Society event, such as a cocktail night followed by the club, or a meeting for a committee I was part of, or visiting the Cambridge Union to see someone famous speak.

We also have formals, which are fancier three-course meals, which we usually went to if there was an occasion such as a birthday.

Sometimes, it would be nice to just chill and watch a TV show or movie; working efficiently is hard but allows you to maintain a good work-life balance.

My Tips For Any Prospective Cambridge Economics Student

To be a successful Economist at Cambridge, time management is the most important skill. It is easy to spend too much time on work and sacrifice the social life, or the other way around!

I would suggest making use of the collaborative nature of the community; for example, splitting the History essay readings between your college friends, or getting someone in your year (or even older years) to explain something you got stuck with.

This collaborative nature also extends to job applications – older years are generally happy to share tips and advice on anything, just make sure to ask!

I hope you’ve enjoyed reading this and found this helpful.

Cambridge is an incredible place, and the experience of having so many things going on with academics, job applications, and running a society (I was president of the India Society in my second year!) has taught me so much about how to work efficiently, and made me a lot more confident in asking for help when I need it.

The logical thinking skills I have achieved as a result of this course, such as being able to reason through a complex chain of events and question assumptions and such, as well as the time management, will be incredibly useful over the course of any career.

Cambridge is indeed an incredible place. At UniAdmissions, our Programmes are designed to give you the best chances of getting your offer to study there.

We help you craft the perfect Personal Statement, achieve a highly competitive Admissions Test score and teach you how to Interview effectively.

Discover our Economics Premium Programmes by clicking the button below.