[Day In The Life] Cambridge Psychological and Behavioural Sciences Student 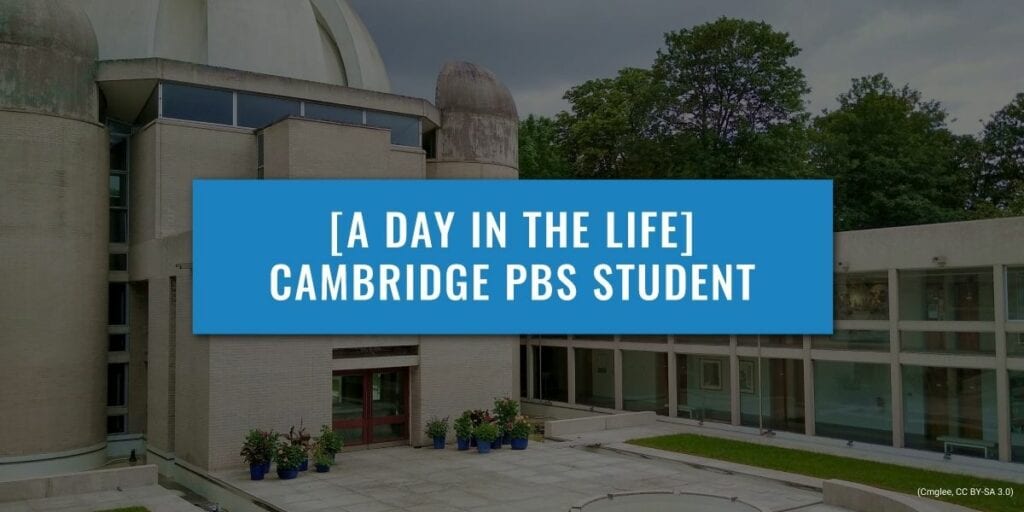 For any prospective applicants to the Psychological and Behavioural Sciences course at Cambridge, here’s what life is like as a Psychology student.

In this series, current and past students kindly share their experiences and day-to-day life studying at university. Sammy recounts her experiences as a student reading Psychological and Behavioural Sciences at Cambridge.

I’m Sammy and I’ve just graduated from Cambridge where I studied Psychological and Behavioural Sciences (PBS). I went to Murray Edwards College (aka Medwards) which is an all-women’s college. I didn’t originally apply to Medwards but ended up loving it!

Is Studying At Cambridge Hard?

I wasn’t sure what to expect when I arrived to Cambridge to study PBS. I was concerned that I’d struggle as I hadn’t studied A-Level Maths and I knew that many colleges like students to have studied maths. I didn’t need to worry as my supervisors were really helpful and maths/statistics only formed a part of one module out of four in first and second year and in my third year I didn’t really do any at all!

It was great that I was able to choose optional modules which suited my strengths and it also gave me the opportunity to try out subjects that I’d never done before. I was also really lucky to have a great range of supervisors across my three years at Cambridge.

Unlike some other subjects from stories I’ve heard from friends, PBS supervisors are usually really approachable and friendly, and their supervisions are not scary to go to! The supervisions will still be academically challenging but they don’t tend to make you feel really put on the spot and if you have any questions or need an extension, in my experience PBS supervisors are usually very understanding.

What Is It Like Studying Psychological And Behavioural Sciences At Cambridge?

The PBS course is really varied, and you have lots of choice about what modules you want to study.

In first and second year you study 2 compulsory modules and 2 optional modules per year. The optional modules are from different departments, including Natural Sciences and Human, Social and Political Sciences, and include options like neurobiology, sociology and philosophy.

In third year, you get to choose 3 modules and you complete a research dissertation. For my third year I chose to study all PBS modules and did Developmental Psychopathology, Social and Applied Psychology, Family Psychology and a dissertation on new family forms.

What Do Cambridge Students Really Do Each Day?

The Morning: Life As A Psychological And Behavioural Sciences Student

I’m not a morning person so I’d usually wake up about 30-40 minutes before my first lecture started. I’d have a quick breakfast, get ready and then cycle from Medwards down the hill to my lecture.

The location of my lecture would depend on the module and they were scattered around the city centre. I’d normally have lectures back-to-back and then a supervision and if I had a gap in between I’d go to the Psychology Department on Downing site and sit in the common room area and get on with some work.

The Afternoon: Life As A Psychological And Behavioural Sciences Student

Once my lectures/supervisions had finished, I’d cycle back to Medwards for a late lunch. Unlike a lot of people, I am not a big fan of working in libraries so I would usually do work in my room or in a common area, like the lounge in my third-year house.

The majority of my supervision work is essays and I would normally have 1-2 essays to do a week. I found that for most topics, the lectures gave a good overview of the topic area and were a great starting point to think about planning the essay.

I’d then go through the reading list and pick out key texts to read, these would almost always be journal articles which were available on Google Scholar or iDiscover, the university’s online library. I think I’ve only ever got a handful of books out of the library during my course, you really don’t need to worry about reading everything on the lists! I would usually only read the abstract and discussion sections of the journal articles and then would start to write my essay.

The Evening: Life As A Psychological And Behavioural Sciences Student

In the evening, I would normally have training for a few hours at the University Sports Centre. It’s at the West Cambridge site which isn’t far from Medwards and is a nice, new facility.

After training, I would cook and eat with my friends. Sometimes I would go to Dome, the Medwards canteen which serves food for breakfast, lunch and dinner daily, but usually I would cook. As I shopped at Aldi, cooking was definitely more cost effective and meant that I could eat whenever rather than the set times Dome was available (usually 6-7:30pm for dinner). Medwards also has better cooking facilities than a lot of other colleges (even though some kitchens may be small!) and I had a hob, oven and microwave all 3 years.

A few times a term I’d also dress up in my gown and go to a Formal Dinner at Medwards or at another college. Depending on the day, after dinner I would either just chill with my friends or get ready to go out. Wednesdays and Sundays are the big club nights in Cambridge.

What Are Your Top Tips For Studying Psychological And Behavioural Sciences At Cambridge?

My advice would be to make sure you plan ahead, I had a monthly calendar and weekly whiteboard planner which I would write all my plans on, including deadlines, supervisions as well as social events, competitions etc. This helped me know exactly what time I had and when I needed my work to be completed. By doing that, you can really make the most out of Cambridge by getting involved in everything it has to offer while also smashing your degree!

My days were usually very busy, but this made my university experience so much fun! It is definitely possible to have a packed-out schedule with extra-curricular stuff and still get all your work done and achieve great results.

Feel like a world-class education and life at Cambridge will work for you?

We help you craft the perfect Personal Statement, achieve a highly competitive Admissions Test score and teach you how to Interview effectively – covering all areas of your Cambridge application.

Discover our Oxbridge Psychology Programme by clicking the button below to enrol and triple your chances of success.