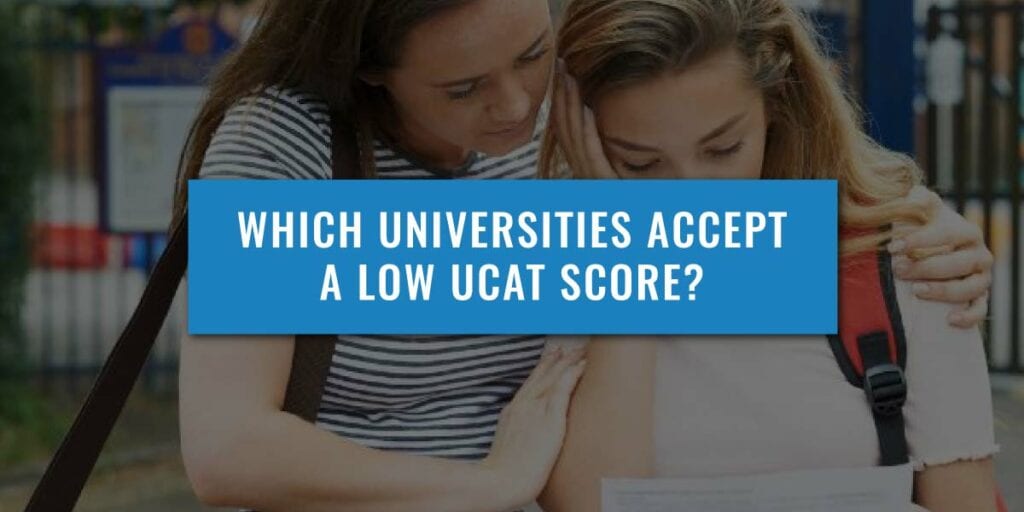 Not all Medical Schools in the UK ask for a high UKCAT score.

Read on to find out which are the low UKCAT score universities and what they take into consideration during your application instead. Sure, you’ve got a low UKCAT score, but it’s not the end…

What technically counts as a ‘low UKCAT score’?

There is no clear divide between a ‘high score’ and a ‘low score’, but you can get a rough idea by looking at the average UKCAT scores over the past few years.

In very broad terms, if your average score for the 4 cognitive skills sections of the ukcat is below 600, and you score a Band 3 or lower in your Situational Judgment section, your marks will not be considered high.

If you scored around 550 average with Band 4, then you would be in the lowest percentile of the candidates taking the exam (based on results from 2018).

Is a low score a big problem?

There are definitely Universities that ask for a very good standard in the aptitude test, such as Edinburgh, which only interviews applicants who score in the top third of all candidates who took the ukcat, however, you can find low ukcat score universities.

In general, these universities with cut off points for the ukcat scores from their applicants will not accept you with a low score.

Getting a low score does limit your options.

However, the UCAT is just one aspect of a medical application, and some universities consider it to be a comparatively unimportant part in comparison with other things like your GCSEs, predicted A levels, and personal statement.

You can also sit the BMAT if your UCAT test date didn’t go too well – this opens up many other incredible medical schools.

Cardiff is an excellent option for applicants with a low UCAT score. Universities such as Cardiff chooses its candidates for interview based entirely on other aspects of the application.

The UCAT score is only taken into consideration in borderline cases, so with Cardiff, you have plenty of other ways to stand out to the admissions tutors.

At Birmingham, applicants are allocated points based on their UCAT score and their academic achievements. However, the UCAT score only counts for 30% of the points allocated, and so if your grades are good enough on their own, you stand a good chance of being offered an interview.

The system at Bristol is very similar to Birmingham, where the UCAT counts towards points for the applicant. However, with Bristol only recently adopted the aptitude test as a part of its selection, it currently only counts for 10% of the points available.

Keele is one of the universities with a minimum cut off point for the UCAT score of an applicant. However, the cut-off score has typically been very low, usually around 580 average, which allows students with fairly low scores to still be considered.

Queen’s is also one of the low UCAT score universities which similarly uses a point-based system that places little emphasis on the UCAT score. Instead they take the GCSEs of the applicant more heavily into account. This makes this an excellent choice if you do not have an excellent UCAT score.

Hopefully, this article has shown you that there are still lots of options even with a pretty low UCAT score.

Universities, as is obviously shown, differ in their requirements.

So don’t worry if the exam really doesn’t go that well for you, it’s not the end of the world!

Also, remember that you can always change the direction you are taking slightly, and instead apply for the universities that require the BMAT instead.

Got a low UCAT score? Don’t worry – it’s not too late to get that place.

It just means that it’s time for a change of strategy. Whether or not you’ve been considering taking the BMAT, the time to start is now.

It is your best chance of getting a place at this point. You’ve still got time to excel on the BMAT if you put in the work and let our tutors help you succeed.